Get fresh music recommendations delivered to your inbox every Friday.
We've updated our Terms of Use. You can review the changes here.

by Marc Hannaford and David Tolley 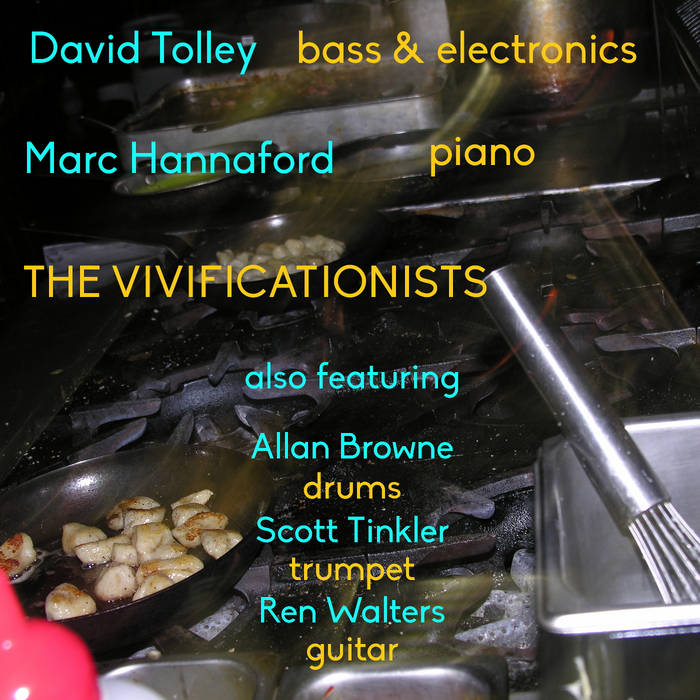 Below this essay are David’s original notes for the release of our recording, The Vivificationists. Given the profound effect David had on my life as a musician, and coupled with the fact that he is no longer with us, I feel justified in adding a few personal remarks. For a more complete account of David’s philosophies of art making, musical and otherwise, I highly recommend his website davidtolley.net Also highly recommended are John Whiteoak’s Playing Ad Lib: Improvisatory Music in Australia 1836-1970 (Currency Press Limited, 1999) and the edited volume Experimental Music: Audio Explorations in Australia (UNSW Press, 2009). While neither volume discusses David’s work at length, they provide a fascinating background and context for the work of many Australian artists and musicians, his included.

David had the ability to conjure interesting performances out of musicians. He possessed both an open attitude to music making and a well-formed idea of what he thought made good music. These qualities made for some of the most thought-provoking and transformative musical experiences I have ever had both as a listener and performer.

When, in 2013, I began improvising with David I already had a reasonably clear idea of the kinds musical materials I was most concerned with; I had already spent a significant amount of time exploring polyrhythm and various intervallic constructions for use in my musical improvisations.

When many music theorists discuss how improvisers “connect”, they often invoke the notion of a shared musical vocabulary. Like spoken language in everyday life, a mutually shared language allows agents to recognise commonalities and thus helps create a sense collectivity. This is the model often used to describe Jazz ensembles, where each player’s knowledge of a particular part of the jazz tradition is regarded as a prerequisite for improvising together.

As soon as David and I began playing together, however, it was clear that our musical materials were starkly different. That’s not to say that our improvisations didn’t “work” - we were both very excited to continue working on musical improvisation together - but that our mode of musically connecting was not through a shared musical vocabulary. Instead, our connection developed through an understanding that improvisation might also constitute a mode of being.

Improvisation, in a broad sense, is closely related to the notion of flexibility. Good improvisers find ways to “work around” problems. It’s what good interviewees do when asked unexpected questions, conversationalists do when surrounded by people from extremely diverse backgrounds, what sports people do when the game-plan becomes obsolete, and is evident anytime the under-resourced cobble together bits and pieces to form a tool that gets the job done.

An improvisational mode of being creates a shared space in which collectivity is created whilst also preserving difference. This balance is achieved through flexibility, or “open-ness”, on behalf of the performers in regards to differences within the group. This is what David showed me. Within this shared space David and I were able to maintain our respective musical languages, recognise differences between them, and allow those differences to exist as part of our work together. In contrast to the jazz group model discussed above, where, difference beyond a certain point of the jazz tradition is treated as an obstacle to playing together, the differences between David and my musical language were not simply incommensurable, but were productive precisely in their incommensurability. There was strength in difference.

Improvised-music ensembles provide excellent opportunities to study how differences between individuals are balanced with group identity. The improvised-music group has the potential to demonstrate that difference, eccentricity, and even inadequacy, may be productive given certain circumstances. I’d argue that an improvisational mode of being is a crucial step to produce such circumstances.

I feel that improvised music can demonstrate that difference need not be feared and eradicated but, with the aid of improvisation, can be productive in a way we never thought would be possible, or that we hadn’t even imagined could exist. It’s what David showed me, and one of the things I’ll remember most about playing with him.

I miss David, his music, his art, his advice, and his thoughtfulness, immensely. Receiving the thumb drive containing these recordings just days after his death was a potent reminder of the brevity of life. I hope these recordings serve both as a reminder of David’s greatness, but also as a demonstration of some of the ideas I’ve suggested here, and, ultimately, as a testament to what improvisation can teach us about ourselves and each other.

David made some artwork for this release. I have slightly modified his images so as to include our essays.

Personally I’d like to thank all of the musicians who played in each of the concerts of the Vivificationists, Martin Jackson and The Melbourne Jazz Co-opertative for giving David and I the opportunity to present and document this music, Bennetts Lane for hosting us, Nicholas Croggan for his assistance with this short essay, and James Savage for recording, mixing and mastering.

In Feb 2013, David Tolley and Marc Hannaford began a collaboration to explore the unconventional in the conventional jazz piano/bass duo. David recalls hearing some of Marc’s solo pieces and determining that he should make some improvisational music with this “extraordinarily inventive young musician”. Moreover, it was not long since he had returned to his beloved contra bass (made by Sydney residing Luthier Neville Whitehead) after an absence of several years. This project was an opportunity to make a contribution the long-standing jazz piano/bass duo tradition.

Martin Jackson and The Melbourne Jazz Co-op saw fit to feature a three night VIVIFICATION Series at Bennetts Lane, Melbourne in 2013. This recording is of the final night in the series.

At various times Tolley introduces laptop material and a loop sampler triggered by the bass.

Bandcamp Daily  your guide to the world of Bandcamp